Journey through Webb’s breathtaking view of the Pillars of Creation

Journey through Webb’s breathtaking view of the Pillars of Creation

Pillars of Creation is a photograph taken by the Hubble Space Telescope of elephant trunks of interstellar gas and dust in the Eagle Nebula, in the Serpens constellation, some 6,500–7,000 light-years from Earth.They are named so because the gas and dust are in the process of creating new stars, while also being eroded by the light from nearby stars that have recently formed.

NASA’s James Webb Space Telescope has captured a lush, highly detailed landscape – the iconic Pillars of Creation – where new stars are forming within dense clouds of gas and dust. The three-dimensional pillars look like majestic rock formations, but are far more permeable. These columns are made up of cool interstellar gas and dust that appear – at times – semi-transparent in near-infrared light.

Let's take a journey to review the Pillaros of Creation through Webb Space Telescope. 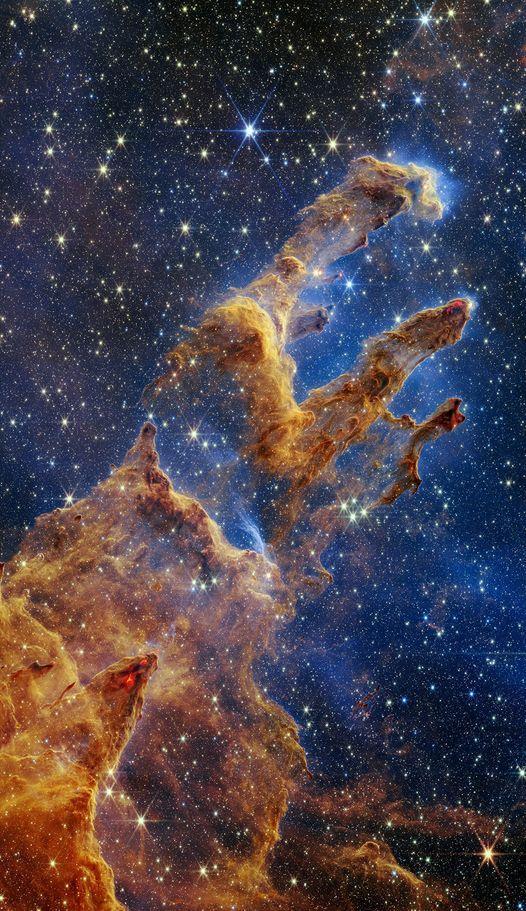 This photo is from the James Webb space telescope, Mr. Mehmet processed out the stars. It looks astronomically beautiful. 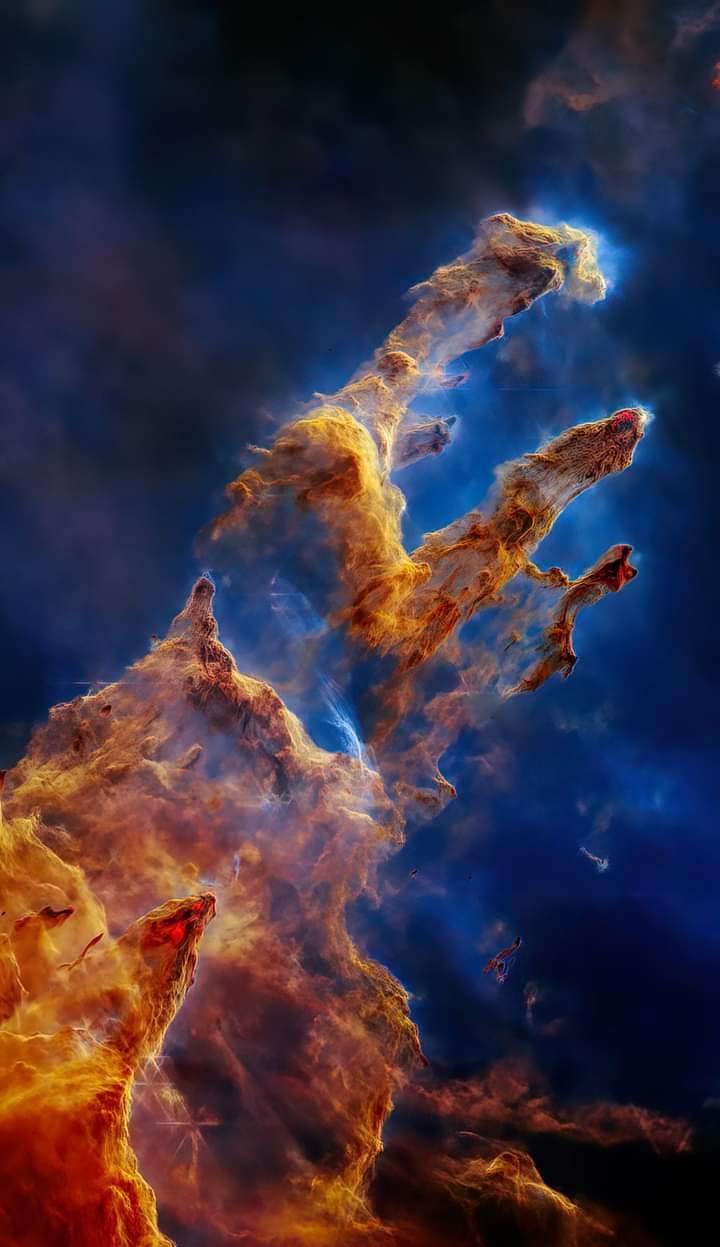 Again, Webb is GREAT! In the meanwhile, let's also enjoy astronomers' unique "Pillars of Creation" by their gears. 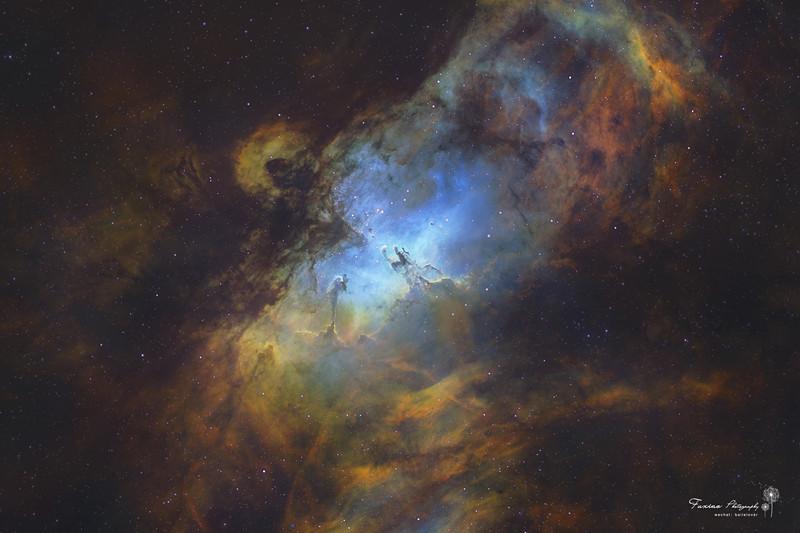 Captured from Grand Mesa Observatory, both the WO 12" RC and QHY600 Mono CMOS are coutesy of and recently supplied by William Optics. I was so encouraged by these great results and with permission from William Optics this setup is now available as an option "System 5" on GMO's subscription plans.

The incandescence of the Eagle Nebula is laced with intricate dark lanes, globules, and huge clouds of dust which shroud ongoing star formation from direct view. The most prominent dark structures are the so-called “Pillars of Creation”, three long fingers of gas and dark dust nearly ten light years long. The Pillars are a field laboratory for the study of star formation and have been examined intensely by astronomers at visible, infrared, and ultraviolet wavelengths. Within the Pillars are much smaller, warmer, and denser regions called evaporating gaseous globules (EGGs), some of which contain just a few solar masses. The EGGs are ground zero for star formation, though it’s difficult to catch these new stars in the act of igniting because they remain obscured by cloaks of dark dust. EGGs located near bright stars are elongated by winds of light and charged particles into what look like schools of celestial tadpoles.

The stars within the Eagle Nebula appear to be in an intermediate state. Stars within the Pillars and other dusty regions remain obscured, while a cluster of some 400 new stars clearly appears in a more transparent section of the nebula. The largest of these stars has a mass some 80 times that of our Sun and the luminosity of perhaps a million Suns. The cluster formed just 2 to 5 million years ago. The nebula itself is only slightly older.

The light we see from the Eagle Nebula and its associated stars left some 7,000 years ago, but some astronomers suspect the Pillars of Creation may have already been obliterated when a massive young star within the nebula detonated as a supernova. The Spitzer Space Telescope detected evidence of a patch of hot gas near the Pillars which may have been caused by such an event about 8,000 years ago.
#universetoday #astrophoto #astro #astrophotographer #NASA #M16 #deepspacephotography #photography #deepskyphotography #astrohobby #longexposure #photoshop #pixinsight #QHYCCD #QHY600M #Space #Sky #deepspaceobject #deepsky #grandmesaobservatory #colorado #Milkyway #milkywaygalaxy #milkywaychasers #Astronomy #Astrophotography @ Grand Mesa Observatory 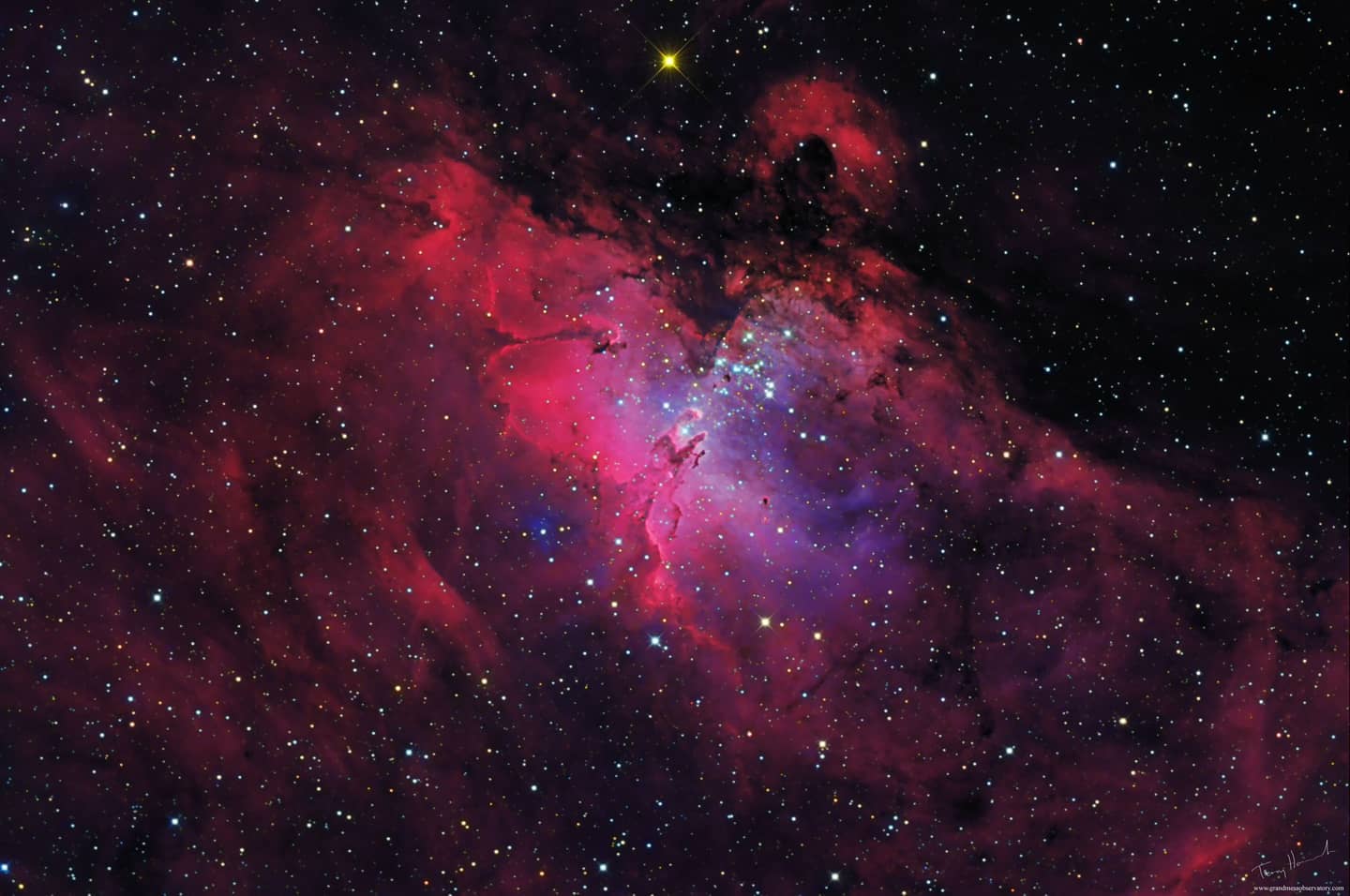 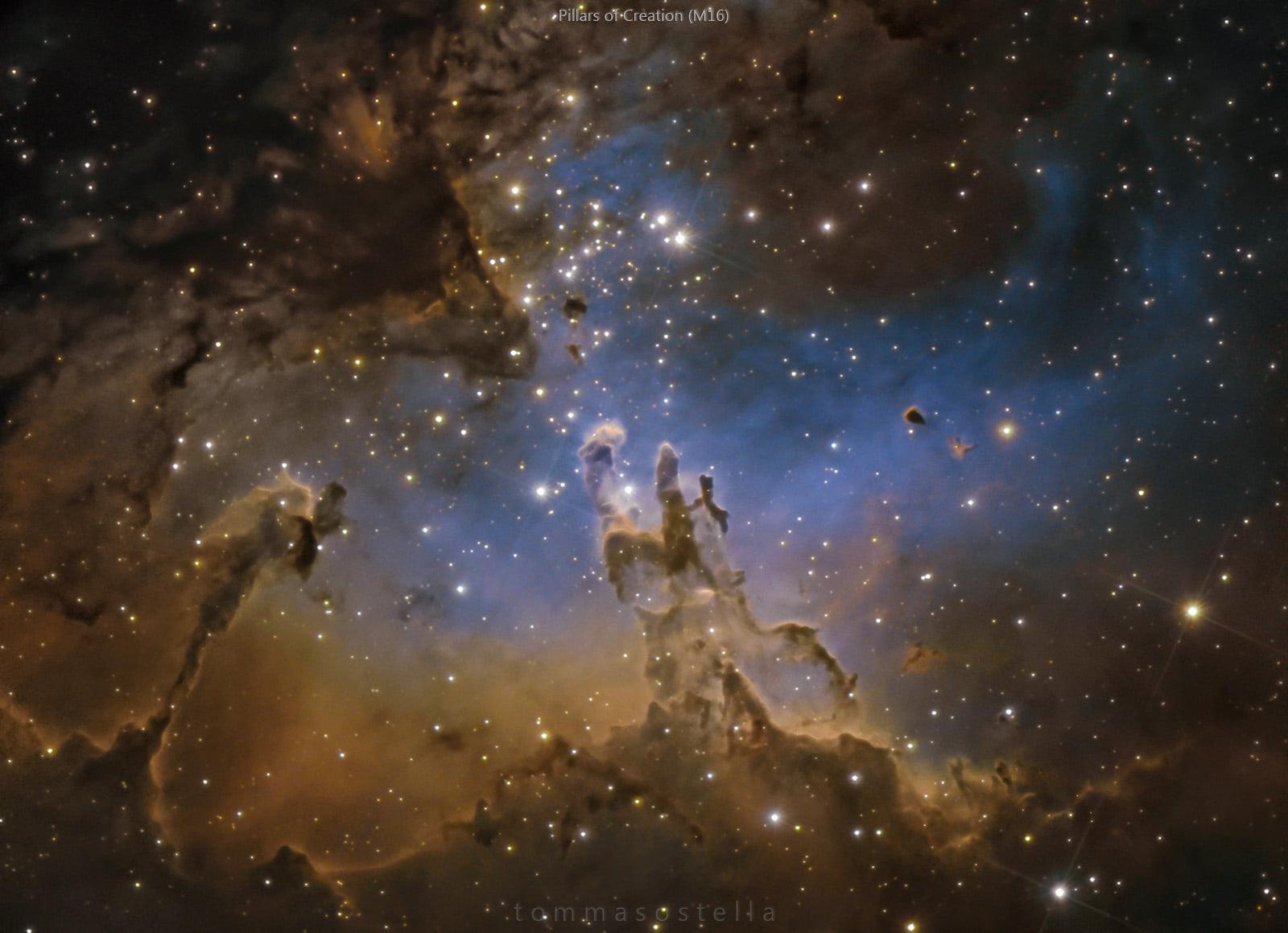 The Eagle Nebula (M16) is a young open cluster of stars in the constellation Serpens, discovered by Jean-Philippe de Cheseaux in 1745–46.  The nebula contains several active star-forming gas and dust regions, including the Pillars of Creation made famous by the Hubble Space Telescope. The Eagle Nebula lies in the Sagittarius Arm of the Milky Way.
The Eagle Nebula is part of a diffuse emission nebula, or H II region, which is catalogued as IC 4703. This region of active current star formation is about 5700 light-years distant. A spire of gas that can be seen coming off the nebula in the northeastern part is approximately 9.5 light-years or about 90 trillion kilometers long (Wikipedia).
Integration time: ~12 hrs evenly across SHO filters
Telescope: Skywatcher Esprit 100 ED APO
Imaging Camera: ZWO ASI 2600MM Pro
Guiding: Skywatcher EVOGuide Scope with ZWO ASI120MM camera
Filter: Optolong SHO 7/6.5nm
Mount: Skywatcher EQ6R-Pro
Calibration: Flats and flat darks
Hardware Control: ASIAIR Pro, Pegasus Power Box and ZWO EAF
Processing: The selected images were pre-processed and processed using Pixinsight.
As always constructive criticism is welcome and appreciated. I am always looking for ways to improve my image capture and processing skills. Thanks for looking. 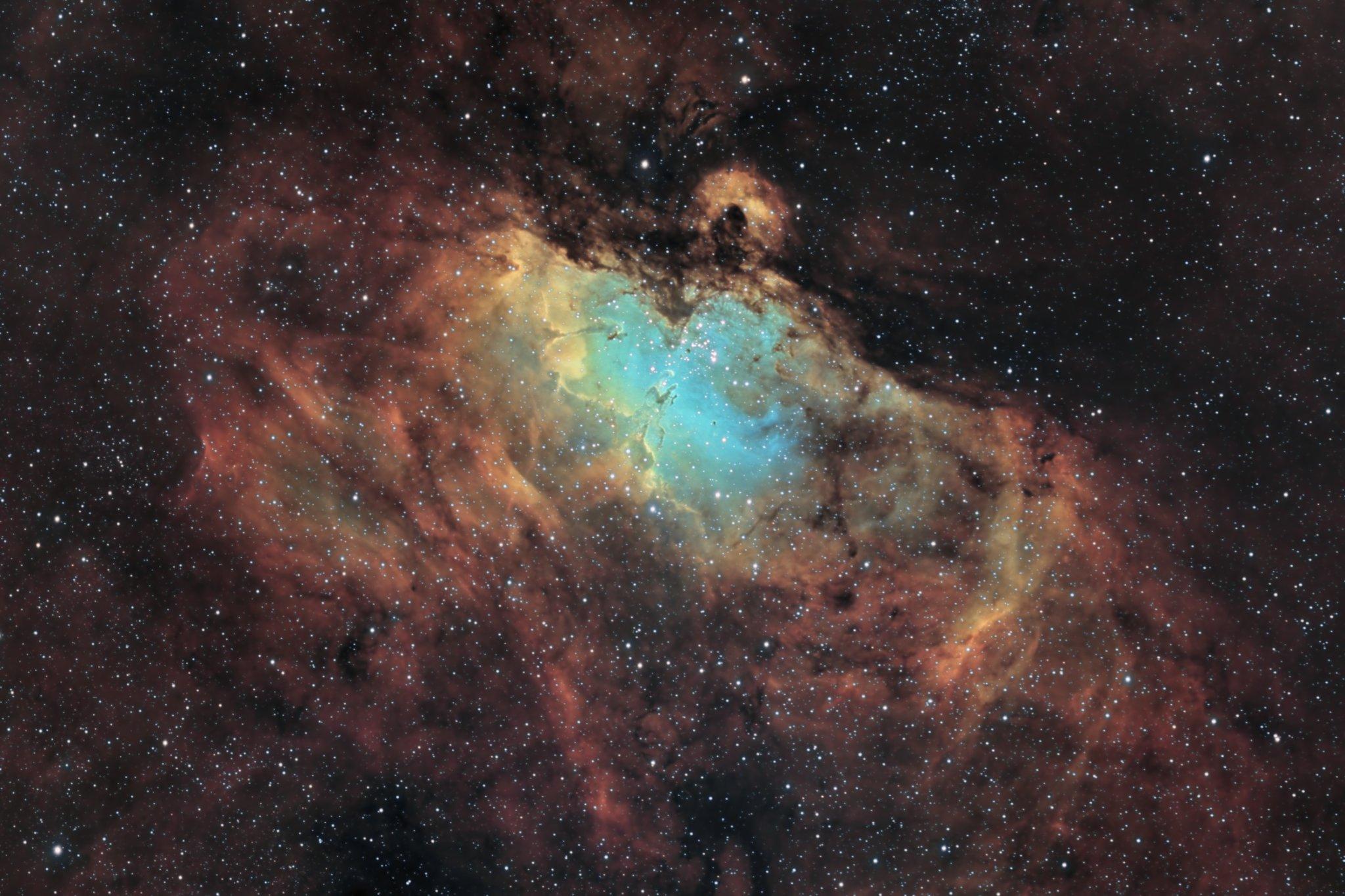 An HOO rendition of my Eagle Nebula data.  This is about 8 hrs total (4 Ha, 4Oiii) using my Skywatcher Esprit 100, EQ6R-Pro mount and ZWO ASI2600MM camera with Optolong Narrowband Filters 6.5nm.  Processed in Pixinsight. 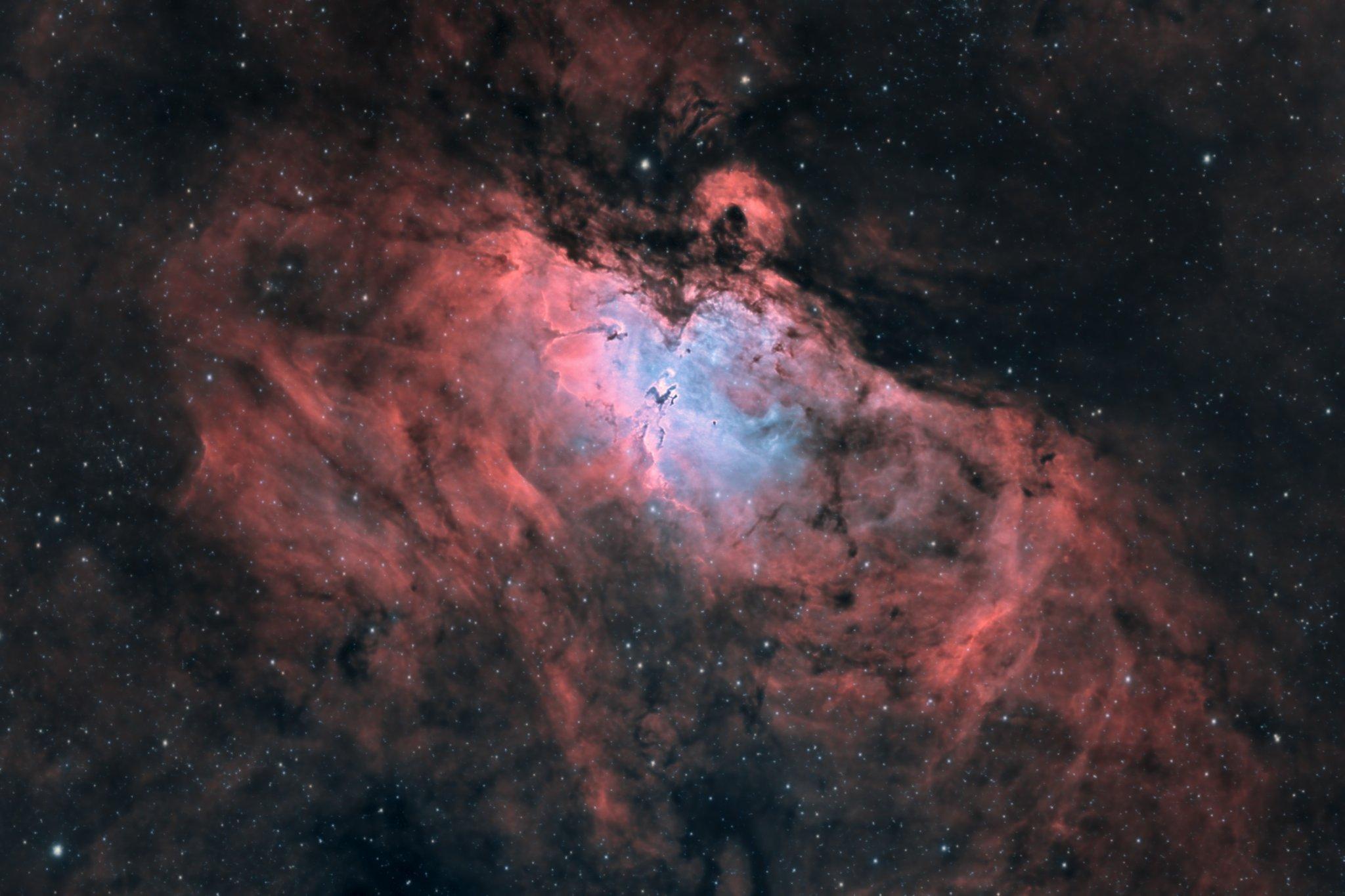 ►M16 eagle nebula and the pillars of creation 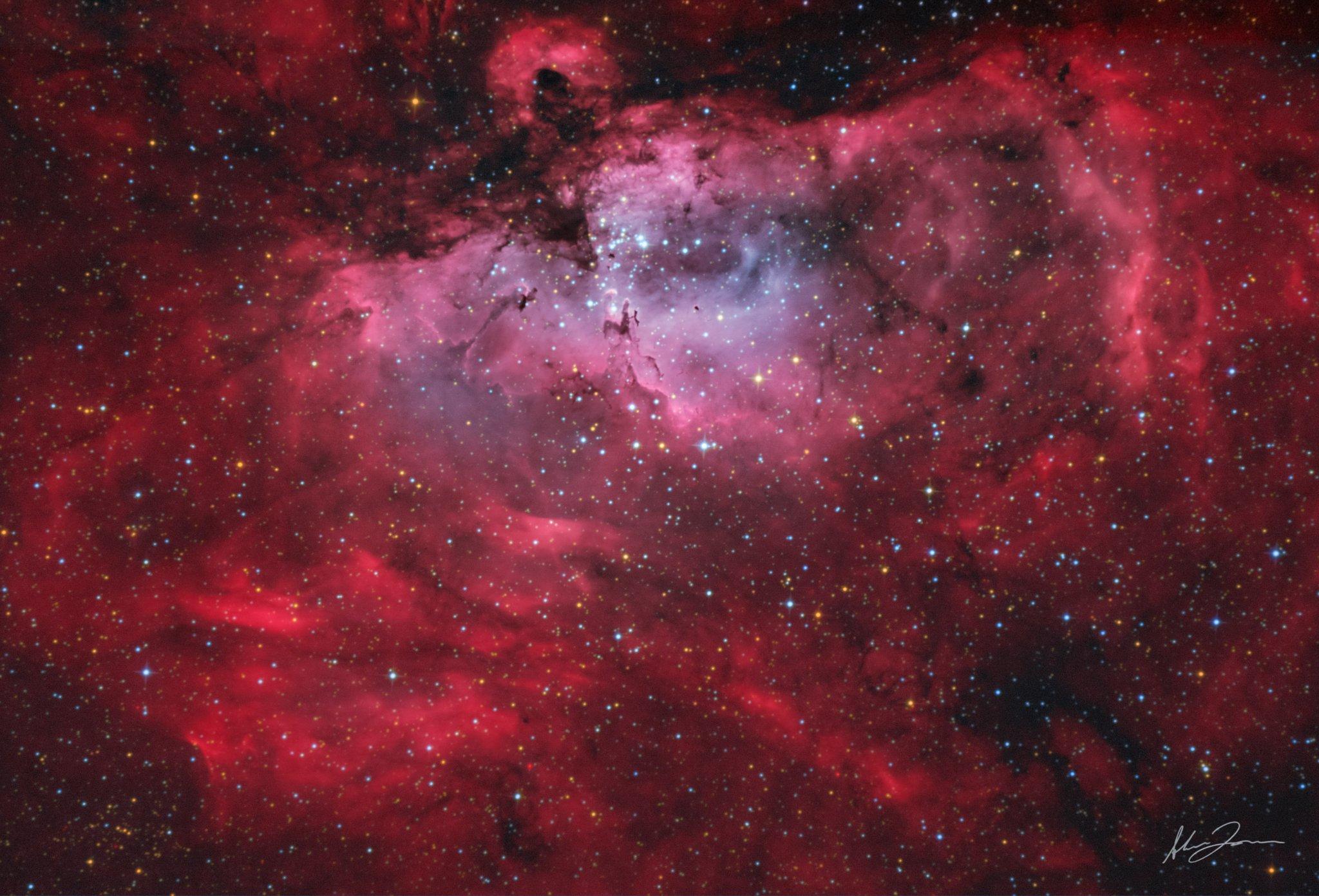 The Eagle nebula is 7,000 light years from away.  And if we zoom in, we can still see the pillars of creation.
RedCat 51 telescope
ZWO ASI2600MM Pro camera
Optolong 3nm narrowband filters 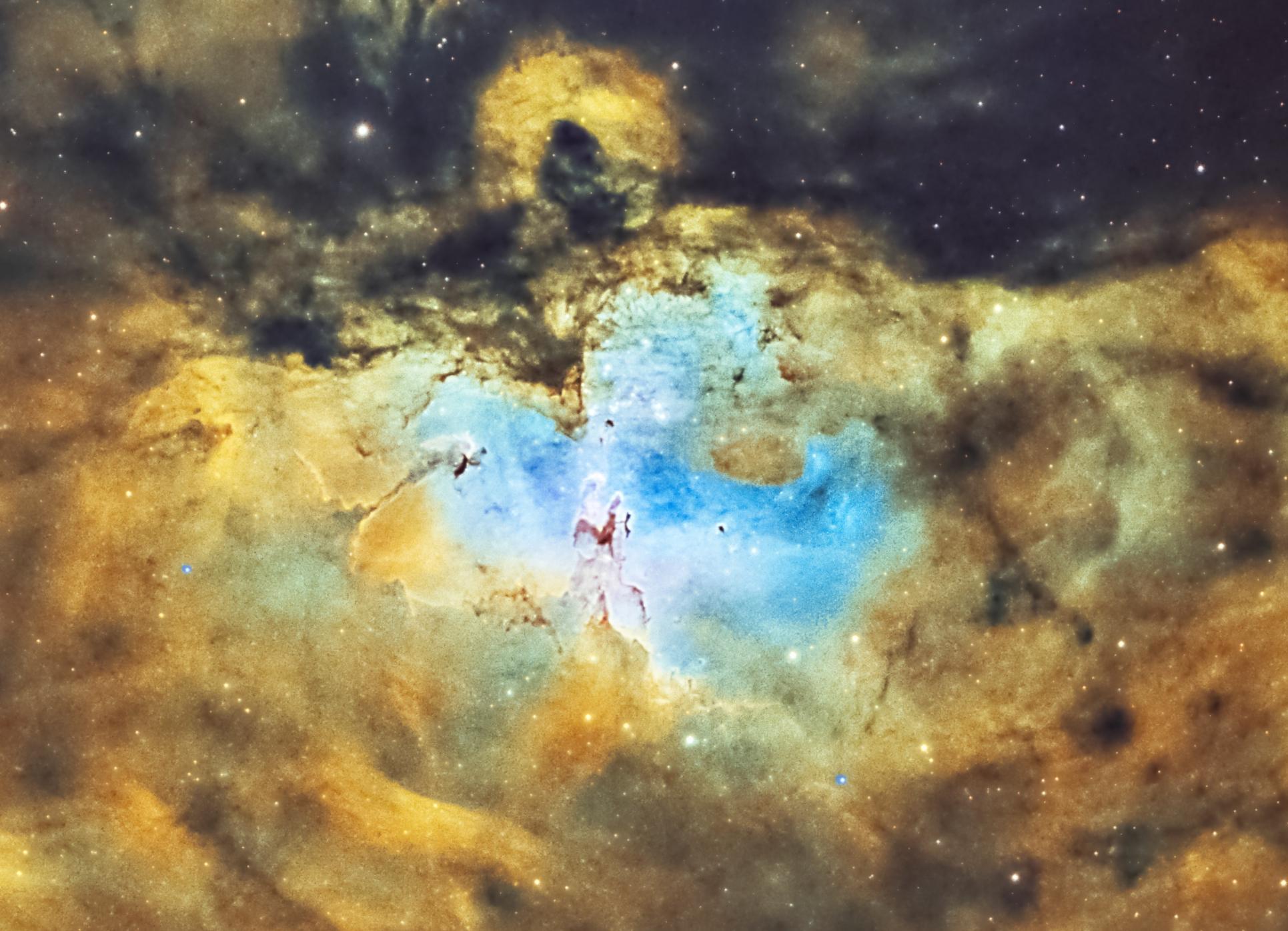 Next： What is happening at the center of our galaxy? Previous：3nm Ultra Narrowband Filters Performance by Chuck and Shawn