I recently had the opportunity to test Optolong's new 3nm hydrogen-slha, oxygen-III, and sulfur-II filters, and overall, I am very satisfied, particularly for their price point ($439 each for 2",  $1239 for the kit). Up until now, they only offered 7nm-class filter (6.5nm for OIII and SII, 7nm for Ha), but for those who live under heavy light pollution and have well-guided mounts capable of 10-minute exposures, 3nm is an excellent option.

Frequently, 3nm OIII filters suffer from halp effects around stards, which is the main element that Optolong asked me to test. They sent me a second, improved OIII filter as well. I tested all three narrowband filters on both my Celestron 8" Schmidt-Cassegrain and my Takahashi FSQ-106N using my ZWO ASI1600MM Pro monochrome CMOS camera under Bortle 7 skies.

Here is a head-to head comparison of Ha filters (Chroma 3nm vs Optolong 3nm) on the "Heart of the Heart" Nebula; each is 7x600s, captured on my Celestron C8 with a 0.63x focal reducer. Note that the average sky quality for the Chroma filter is 18.07 (all form the same night), and for the Optolong filter is 18.96 (also from the same night), so the Optolog filter data had better contrast to start with. The two images were processed with basic denoising and stretching. 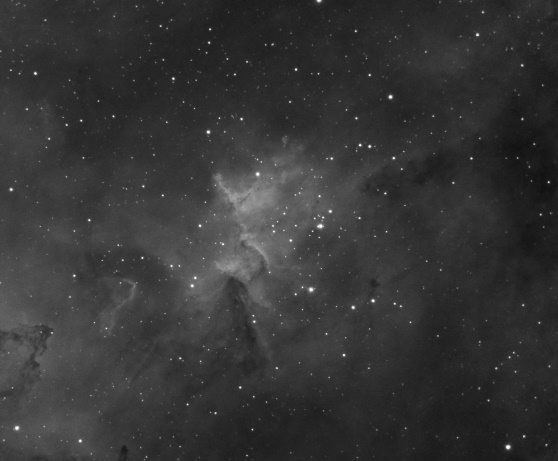 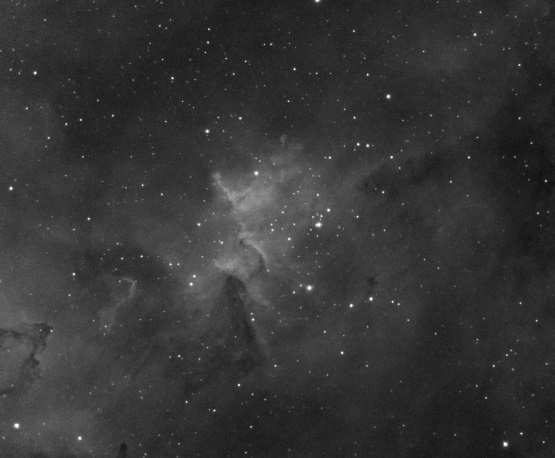 Upon very close inspection, the stars in the Chroma filter are slightly smaller than those of the Optolog filter, but I had to blink the images rapidly in order to notice it. This may also be due to seeing conditions on the two night. The transmission efficienty of the two filters appears comparable.

To push the limits, I aimed my camera at a bright star to look for halos - Polaris, magnitude + 2. I used my Takahashi refractor instead of my Schmidt- Cassegrain to avoid inevitable internal reflections from bright stars.

The Ha and SII filters show microlesing from my camera, which is not dependent on the filter, but rather the long exposure time. The diagonal spike is also from the camera and not the filters (it shows up in my ohter filters as well). The OIII filters shown here is the second one Optolong sent me, with improved halo performance. While there is a halo in the OIII filter still, it is well-controlled for how oversaturated the star is at this exposure time.

At the end of the day, how does a complete image look with the Optolong filters? 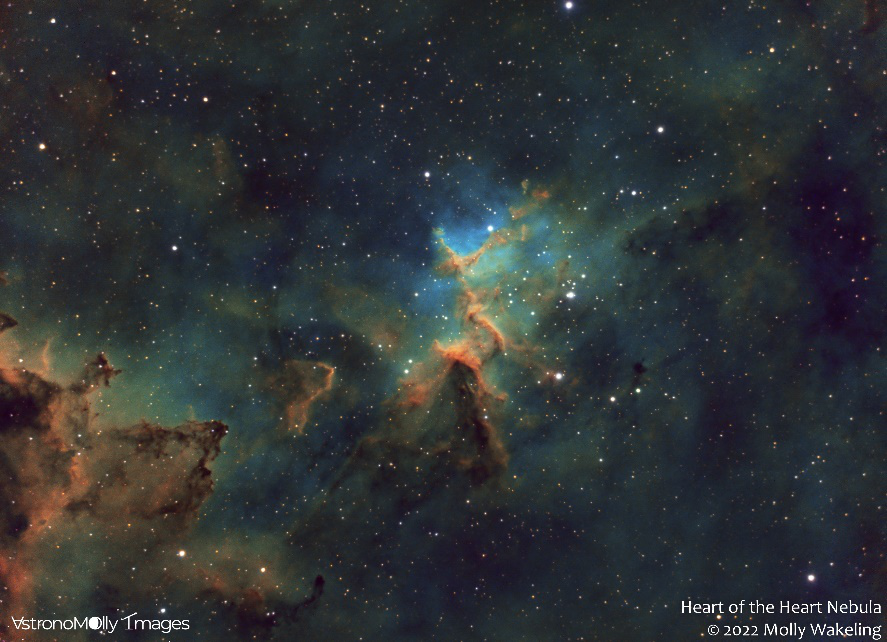 I started imaging the Sould Nebula as well with my Takahashi after I switched the camera and filters over to it, but unfortunately ran out of time as it sank below my roof. This results in the "unfinished" image below , with overall low signal, but it is still a decent example from a different telescope. 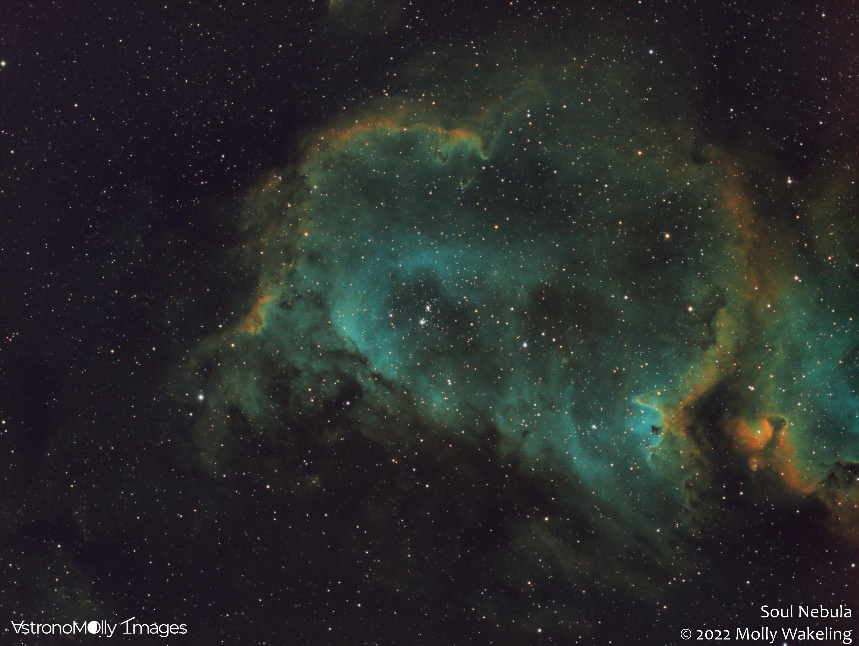 I am very proud of my Heart Nebula image, and very impressed with the filter performance in general on both telescopes. I think the difference between these Optolong narrowband filters and teh higher price tier (Chroma, as compared here --- $1,300 each for 2") is relatively small, at least from the testing I was able to accomplish, and that the Optolong filters are well- worth their much-lower price. I currently own Chroma 3nm Ha and OIII filters, but I think I wil complete the trio with an Optolong SII filter.

The Pelican Nebula is a hydrogen emission region in the constellation Cygnus -- aka, a stellar nursery. Cygnus is usually associated with summertime when it's high in the sky, but it's far enough north that it's visible well into winter. It's part of the larger North America Nebula structure. Hot, young stars with energetic stellar winds carve out shapes in the gas and dust clouds.

The coloring here is false-color; I've imaged hydrogen, oxygen, and sulfur energy transition emission lines; basically, specific wavelengths of light emitted by excited atoms. Both hydrogen and sulfur glow a deep red, while oxygen glows a teal-green; in order to differentiate sulfur and oxygen, sulfur is assigned to the red channel, hydrogen to green, and oxygen to blue. Because hydrogen is so much brighter (because there's more of it!), I have to balance out the colors a fair bit to make a nice representation.

I haven't done much Hubble palette before because I don't own a sulfur filter (yet)! 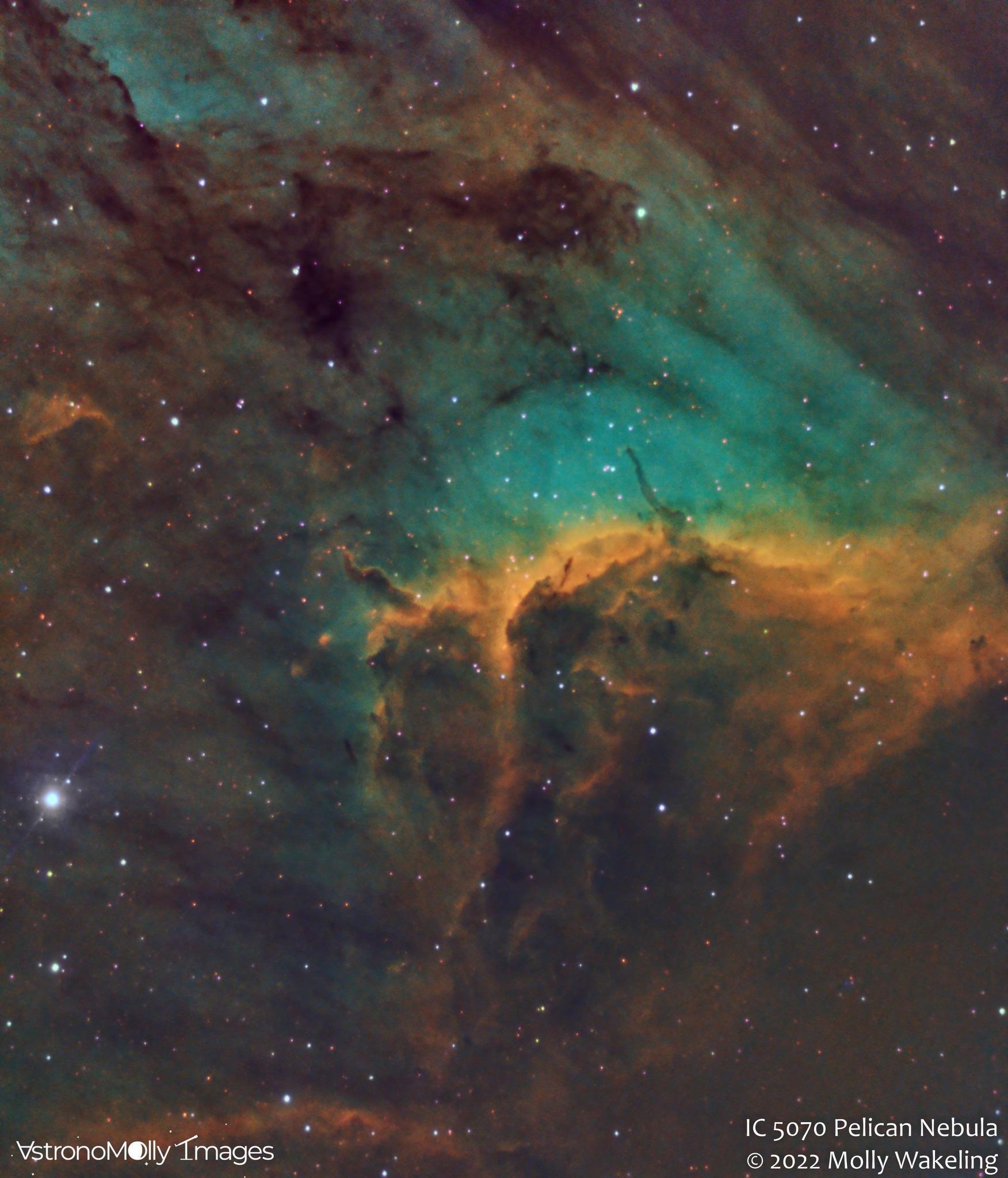 I got into astrophotography in July 2015 after receiving my first telescope as a gift, Much trial and error later, I now have three astrophotography rigs set up in my backyard just north of Berkeley, CA, in the San Francisco Bay area, including one dedicated to variable star and exoplanet transit observations. I love doing STEM and astronomy outreach, and I've accrued more than 150 hours of volunteer activities reaching over 20,000 people, both in-person and virtually. I am an AAVSO Ambassador (American Association of Variable Star Observers), an Explore Alliance Ambassador, and a panelist and broadcaster for The Astro Imaging Channel weekly YouTube show. I have a B.S. in Physics from Washington State University, and am currently pursuing my PhD in Physics at University of California, Berkeley, studying neutrinos with my two cats, Orion and Apollo.